It's a big week in GameGuru with some huge moves in store for the engine.  Just take a look at some of the commits over at GitHub for an idea of what's going on: 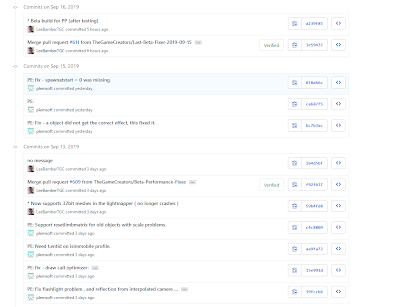 Time to unpack this for the less technical.  This last week a beta update was released for closed beta testers.  The primary focus on this was the addition of Preben's draw call optimizer.

Now draw calls, straight up, are sort of the end-all be-all for performance with respect to rendering. Sure, there's other variables but if your draw calls are too high, then your renderer is working too hard and it will cause bad performance.

From my book An Introduction to GameGuru: Chapter 21 "Optimization":

Draw calls represent at least one, possibly more, of every object being ‘drawn’ on the screen.  This is a highly important bit of info, likely the most important performance information statistic next to the raw FPS count.  Draw calls should be around 250 with a top end of around 500.  Once they go beyond those numbers, it will start to seriously drain performance on even top end systems.  The trick here is to run through your level and if you see a place where it spikes, try to determine which objects can either be replaced or removed to kill the performance bottleneck.  Please note that officially draw calls are actually each material of an object, so PBR objects significantly increase draw calls and can easily overwhelm a scene if you don’t take careful steps to optimize object quantities and positions.

What Preben has done is create a draw call batcher that groups together draw calls for similar entities to avoid calling the same thing many times.  This reduces the total number of draw calls considering that most entities are not only used one time in a level but a great many times. In fact, he even expands on my above explanation by detailing that every 'draw call' reported in GameGuru is actually to be multiplied by 10.  This multiplicative effect means that the difference between 500 and 1000 is much more pronounced and can have a massive performance drain.

He explains it very well here in a video:


Initially the beta had some serious issues that were rapidly remedied and so far the results have been excellent with often 30 FPS added to a single scene WITH NO OTHER OPTIMIZATIONS.

Moreover this now has trickled into a Public Preview (open beta) build which will help hammer out the next big release.  I'm really proud of how TheGameCreators and company have stepped up after nearly half a year of no updates - if they keep rolling on this we may yet see this engine become vastly more capable yet.

Also a reminder that the contest is still ongoing with a huge amount of prizes available.  I am still considering if I want to give a copy of the book away but I think I might, just to help kickstart this thing.  What do you all think?

While not *TECHNICALLY* on the store it bears mentioning that a new pack was released by TheGameCreators. As usual, their quality is generally a cut above most store content and so it's a great value if you are looking to supplement the basic 'modern warfare' assets that come with GameGuru. This is, in my opinion, a clear winner for TheGameCreators.  It supplements a model base that comes with every instance of GameGuru but gives it much more to work with.

On the store itself there's a huge amount of fantastic work available for great prices. Gtox posted this great giant ant (ala 'it came from the desert'): He also made a pretty wicked scorpion: Teabone made a very detailed orange, focusing on his strong point of easy, simple set pieces: And Team Wolf posted an 'all my models (152 in total)' pack for 12 dollars!  This is a fantastic deal and I'm actually buying it after I finish writing this post up. 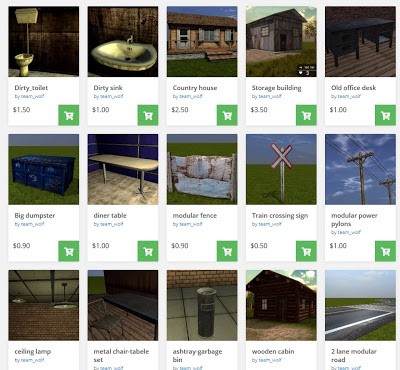 Really good quality stuff for a very reasonable price - I urge you to give it a look here: https://www.tgcstore.net/pack/11151

It also bears noting that there are two very superb artists putting up some great deals on their own works, notably BSP and Rolfy - definitely check out their store pages!

This week a number of freebies went up.

SmallG apparently has gone from scripting to model design in an apparent departure and has gifted the community with a few new pieces to work with:
A low poly witch, A robot and A simple low-poly car

Newcomer Fumar posted a gorgeous model of a Church: https://forum.game-guru.com/thread/221118

Thanks so much to all the creators who give to the community!

First of all is this really great FPE file editor with model viewer.  This is a pretty interesting tool I'd love to see integrated into the editor itself.

Apparently bored of the rings is still giving out his old tools via private message if you are interested.

Cybernessence dropped in and gave a huge amount of info on his project here: https://forum.game-guru.com/thread/213870?page=7#msg2620877 Apparently, he's been using the drawcall optimizer to great effect!

Nothing I can discuss currently but more details to come so keep an eye on this space.
Once again, thank you to everyone who has purchased my book or helped with its production. I really appreciate all the kind words and encouragement!